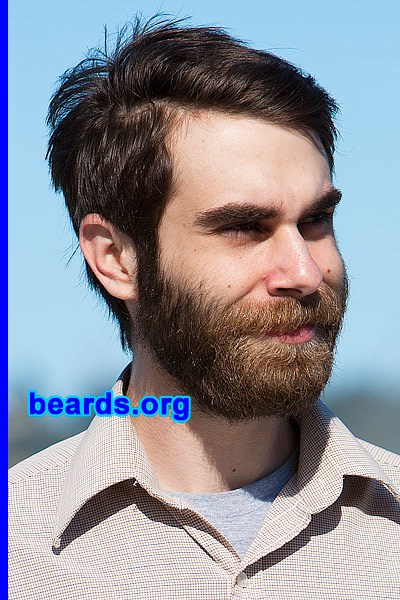 I hear from far too many beard growers, especially new beard growers, that they are afraid of the cheek line of their full beards being too high.  So they butcher their beards into unflattering shapes in their misguided attempts to make their beards look more “acceptable”.  Some use the excuse that their beards grow all the way up to their eyes and that they will look like the much-feared “wolf man” should they leave the cheek line natural.  They say that even when there are actually inches (or even more centimeters) between the natural upper cheek line of the beard and their eyes.  The beard-growing-all-the-way-up-to-the-eyes fear is almost always an exaggeration and a misperception, likely based on shaky self-confidence with respect to the new full beard.  In uncommon cases, the beard nearly does grow all the way up to the eyes.  In such a case, the cheek line could be lowered without butchering the beard by not going  too low.  The main point here is not to jump to the conclusion that your beard nearly grows nearly all the way up to your eyes when the reality is that it does not.

Another common rationalization for butchering the beard’s cheek line is that it somehow makes the beard less objectionable to potential naysayers.  Don’t fall into that trap.  You’re growing a beard.  Embrace that fact.  People are going to see it.  You are already stepping out from the norm by growing the beard.  Why not grow your beard to its full potential, which is usually its best look?  That’s a lot better than butchering it down to some unattractive and amateurish shape.  Again, you’re growing a beard.  Do it right!  Don’t ruin the shape of it just because you fear that leaving the cheek line natural is just going too far.  It almost never is.

What if you’ve given the natural cheek line a truly fair chance and you just can’t stick with it?  You feel that you really must give the cheek line some sort of “clean-up” or definition.  Well, if you are convinced that you must, then just take off the minimum amount to smooth out the cheek line and give it a more defined look.  This keeps your beard the closest to its natural shape while giving the cheek line a more precision look.  In other words, you’ve created the best-defined cheek line possible without needlessly butchering the beard.

Don’t be afraid of heights!  Let your full beard’s cheek line go natural with confidence and pride.  And if that’s just not for you, at least define your cheek line by taking the least amount possible away from the natural.

33 thoughts on “don’t be afraid of heights”